The Book Thief convinced me to make better choices... 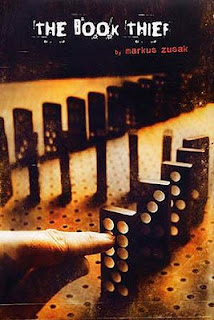 Nearing the end of the 550 page, The Book Thief, tears began to stream down my face. Reading such a long novel, not only does one sense the end coming, but rather you can feel it. The lobsided book was precariously placed on my lap, my eyes were racing over the pages as my mind was contemplating how was it going to end. I could hear myself shushing all sounds in the room, sinking into the ending even further after my daughter's went to bed. I was completely absorbed.

My husband entered the room and noticed my tears. He casually asked if I was okay. Although I didn't want to pause in the moment, I answered I'm wonderful.

As soon as I finished, the first thought to enter my mind was, what an incredible story. Then rather oddly I thought, television is such a waste of time. I tried to recall a time when television enriched my life like a piece of well written historical fiction, but I couldn't. To think I spend mindless hours sitting in front of a television, flipping channels, watching nothing but junk to be momentarily appeased. That time could be spent being transformed into the lives of others, through their story in words. Instead of being spoon fed entertainment, my mind has the opportunity to create character's images, setting, or the feeling of food being rationed during a time of war. In turn with a wonderful piece of literature, my mind is the director and producer, with the driving force being the writer handing me the script of a lifetime.

The Book Thief was originally introduced to me as an assignment for Graduate School. When I first picked up the book I instantly flipped to the end to see exactly how long the book was, for it's size is intimidating. Initially I was feeling hesitant during the beginning of the book, wondering if I was going to get into this one. The story is narrated by none other than death. I recall sitting on my front lawn, book in hand on a beautiful sunshine filled day thinking, death? This is going to be a long book. Before I knew it, the characters I would come to know and love started to be introduced. Deep down I never feared the quality of the writing or the depth of the story, as my Professor has an innate sense of the gems in the world of literature. This time her pick was straight on the mark.

Reading a piece of historical fiction in 2009 was very poignant to me. Our lives, even during a time of War is barely phased by the reality of men and women in service fighting for our country. We've been fortunate enough to not have to endure a harsh impact of war, just recently our economy has given us a glimpse of the harder times that may be ahead. But once again, I am reminded how incredibly lucky we are.

On the other hand, Liesel a young girl moved to Germany to live with foster parents had already lived through abandonment by her mother and the loss of a brother. She was handed over full swing into the rise of Nazi Germany. Unlike any preconceived notions I may have had about living in Germany during World War 2, Liesel's new neighborhood was falling apart, jobs were lost, storefronts were vacant, food consisted of the same meal day in and day out, pea soup. Her foster father, Hans, even settled for a cigarette as payment for his work as a painter. Liesel comes into her new life facing the harshest of realities, but has a determined magical spirit. A spirit that touched my life.

This story of The Book Thief is so much more then I could capture. It's about death, living, and loving. It's about lives driven by human nature, which is not always acceptable behavior in Nazi Germany. It's about a girl's love for words and how it ultimately transforms her life, not to mention the lives of so many others. We feel small moments of triumph mixed in with larger profound life changing events. And yes there's death, the narrator, whom actually provides moments of humor in this rather seemingly dark story.

From the inside book cover, I leave you with, "It's just a small story really, about, among other things: a girl, some words, an accordionist, some fanatical Germans, a Jewish fist fighter, and quite a lot of thievery..."

I also came across this, in case you'd like a visual glimpse into the novel:


The Book Thief by Markus Zusak can be found here!
Moments of clarity