March 23, 2009
You've heard of Twitter by now, right? Well, I was a late comer to the world of Twitter, just joining back in December. Twitter just celebrated it's 3rd birthday this past weekend, so it's been around if you were in the know. It's definitely been a hot trending topic in mainstream media recently. But in all honesty, I was a little reluctant to join the Twitter world, thinking it wasn't for me. Yes, I had the same opinion about Facebook which has also changed dramatically since joining six months ago. At this point, I definitely don't regret my decision to join Twitter, it has been a positive experience for me. 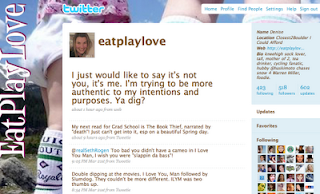 Just for a little background on Twitter, it has been deemed as real time microblogging because your "tweets" as they are called are limited to 140 characters or less. Meaning the thoughts you share with others have to be to the point. But the more time I come to know Twitter, the less I would call it microblogging. Does it really need a succinct catch all phrase to describe it? In some ways to me, Twitter is undefinable.

Three months out, I am now just coming into my own with Twitter. I am starting to feel out what I want from Twitter. For me, Twitter is about building relationships and creating community, just like blogging. Initially I was enthralled with numbers, the number of people I was following (which means the people I chose to receive their updates in my twitterstream/homepage) or the number of people following me (the people choosing to receive my updates). I would look at someone's Twitter stream before following them back to see if they were interesting and engaging or just broadcasting all self-driven check me out, read my blog, buy my product updates. Twitter really is an exchange of ideas and I've learned so many things from brilliant folks that are authentically sharing what they are passionate about and find interesting.

But then it hit me. I started to crave something on Twitter that was very silly and superficial to me. A number. Without ever deciphering what number would make me content, like if I had 1,000 followers that would be awesome. But would it? Would I feel more complete with 1,000 people reading what I shared in 140 characters or less?

The answer is no, I wouldn't. There isn't a number that appeals to me anymore.
This evening I went through my list of those that I follow and decided to weed out those that weren't looking for the same thing out of Twitter that I am. Maybe I misjudged some and if I did, I apologize I am only going on their numbers and their updates, or if I have interacted with them on a personal level (which you can do through Direct Messaging or @'ing). There is a huge percentage of Twitter users that just chase numbers, just want to find someone else to follow that will follow them back, growing their numbers. Blah, huh? Oh and there are programs you can use to automatically grow your numbers and strategies to blast you onto the Twitter scene, if that's what you want. The number chasers, the broadcasters are not for me anymore. Is someone on Twitter that is following 12,000 people really catching what I have to say? Umm, probably not.

Scaling back is better for me. Before going to bed tonight, I unfollowed a large number of people that I had not authentically communicated with since I joined Twitter. The big question is, out of all the people I chose to stop receiving updates from, how many of them will no longer follow me? Was I just a number to them? That's what I will find out. I don't only follow people that follow me back, but the majority of those I follow do. It's not important to me if they find me interesting, I want to follow those that I find intriguing even with out reciprocation.

I will reaffirm, Twitter is a whirlwind, it's fun and interesting. I have real life friends on Twitter that I've known since elementary school, my husband, my mommy friends, friends scattered from west coast to east. Then I have my blogworld friends, just one update away that I enjoy getting to know on a completely different level. Not to mention, I have a whole hodge podge of celebrities like Rocco DiSpirito to Ashton Kucher to Lance Armstrong that I follow that make Twitter a more dynamic place. I love that Twitter is always in flux, just like what I am seeking from it.

If you're on Twitter and by chance we aren't friends yet, please share your @ in a comment, I would love to read what you are sharing. If Twitter is a completely different experience for you, please also share, I'd love to hear your insight.
Moments of clarity