Remembering Columbine: The Impact on a Student Teacher

April 20, 2009
Ten years ago I was a student completing the last of my courses before receiving my license to teach in Colorado. Ten years later, I am a Master's Student at the same University (please don't let me be a student in ten years at CU). That very day I was home in my peaceful cabin in Fourmile Canyon, when I flipped through local breaking news coverage of a school shooting. School + Shooting didn't go together very well in my mind. I watched wide eyed for at least twenty minutes before the reality of what was happening hit me. I called the School of Education, where I worked to urge them to catch the news coverage. Before I knew it, national news had picked up the story and broadcast nothing but the same images for the next twenty four hours. Those images I can still recall, those images which I wish had never been created by hatred.

We all remember that day, in our own way, how it impacted our lives. I've read recently that our memory fades, we hold onto things that may be distorted from the truth. Ten years later, many are making it their duty to get the truth of Columbine out to us. Do I hold onto a distorted version of the reality of that day, I am sure I do.

The words Trenchcoat Mafia, loners, thirteen fatalities (plus the two killers), Hitler's Birthday, massacre, high school shooting, emblazoned in my memory, forever. The sadness hits so close to home for a few reasons, my profession was shattered at the core and it happened in my state, just a few towns away. 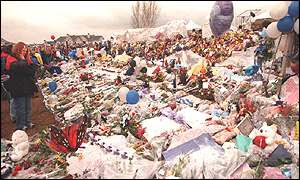 This local tragic event was one of my first memories of news stories playing images repeatedly, over and over again. Desperation and sadness poured through the screen. Mountains of flowers, notes, and mementos began to fill Clement Park. The outpouring was so great that heavy machinery had to be moved in to clear out the debris. Today a memorial fills the space, a place to gather to remember the loss, the thirteen lives that have forever left a mark on our hearts. The thirteen lives taken too soon, where would they be ten years later?

I still sit wondering to this day, how two teenage boys could be filled with so much malice and hatred. We don't know what happened in their short time on this earth, but we do know they lived in an affluent community and were given what seems to be only the best. They "seemed" to be living the dream. Obviously it wasn't, but what have we learned?

The impact Columbine had on me was profound as an educator. I was at a pivotal moment on my career path, planning on entering the work force the following school year. I never took for granted the opportunity to look every one of my student's in the eyes and let them know how important they were. Or how they made me smile. It was my job to bring fun into the classroom as well as discipline. In fifth grade, I talked to my students about setting goals for a brighter future and how they could achieve them. I talked to them about college, which many of them had never thought of before. The bottom line was Columbine made me reinforce in my students that I valued them and our conversations. To think two boys possibly went through life, not knowing how precious life was, how important they were to the greater good of our society. I'll never forget that, ever.

My former students are high school aged and beyond. I've run into a few of them, it's like a little life blessing seeing former students grown up. One was a senior applying to college and another was already in nursing school. I always wonder how the rest are, what path life is taking them on. I often wonder if they are kind and caring, values I believed were just as important as long division and reading comprehension.

Today I picked up my daughter from school. She noticed flags flying at half mass and inquired why. Tears welled up in my eyes as I remembered yet again that day. I told her there was a tragedy ten years ago right here in Colorado and this is how we honor those that were lost. She wanted to know details and why. I simply said, I'll tell you in a few years when you can really understand, but I promise you someday you will.
Moments of clarity