Great Grandma vs. Her Grandson in Wii Boxing Of Course...

January 07, 2011
A friend of mine posted a photo on Facebook and it made me smile. I asked if I could share the photo here because I had a connection to the moment, even though I wasn't there. Back in December I had the opportunity to bring a Wii along to a holiday gathering that a friend was hosting, set up the Wii to play, and then leave the Wii as a gift to the host. No strings attached, just a simple, SURPRISE! oh and ENJOY!

Truth be told, I would have never envisioned the Wii allowing this moment to happen: 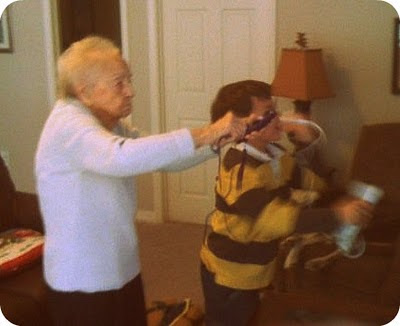 In the photo is my friend's son who is seven (one of Sj's oldest friends, they started playing together when they were little non-mobile drooling babies) and his great grandmother who is 95 years old. Yes, NINETY FIVE!!! They are Wii boxing! I didn't inquire as to who won the match, but doesn't Grandma look like a little spitfire?!? I can only imagine what she scored at bowling.

How fabulous is that?

----------------------------------------
Disclaimer: I was given a Wii to give away as a holiday gift because of my involvement as a Nintendo Brand Ambassador. To be completely honest I was not asked to write about the gift, but really how could I help myself, that photo is priceless. HUGE thank you to Nintendo for allowing such a cool moment to happen between 4 generations. The compensation I received was the joy in the faces of my friends when I told them, the Wii is yours to keep!
Nintendo Enthused