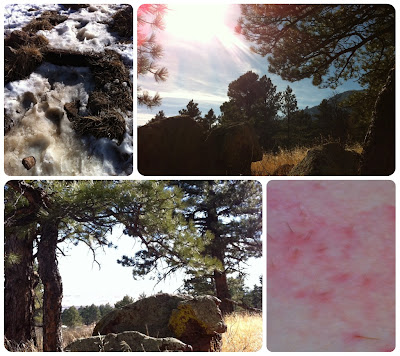 On Tuesday the weather was beautiful, after a tour of Third Street Chai (more to come on that) I decided to hit the trail for the last 1.5 hours before school pickup. Even though the sun was shining bright and the temperature was nice and warm, the hard ice and snow pack on the trail had yet to melt off. The photo on the top left was from the trail on the initial climb. It's hard to navigate the trail when it's like that, it becomes very slippery and often I do a bad thing and move off trail just a bit to help gain my footing.
Once I was to the top and hit the main trail, it wasn't as bad. I glanced off to my left at one point and saw a beautiful spot with some rocks and trees to take a photo. In my usual fashion when taking photos, I typically sit on the ground or rocks to get a varied perspective when framing the shot.

At some point while taking the photo on the top right, I sat in a plant that had prickers. Now the ground was mainly covered in snow, so the only place I do recall full on sitting was on a rock. It was covered in moss, but does moss ever have prickers? I don't know. The interesting part is, I was pretty early in on my hike. I didn't notice I sat in prickers until I was a few minutes back on the trail. I thought I could just pull away a few that were stuck in my pants, but I was quick to learn that the had actually entered my skin in my right butt cheek. I spent the rest of my hike with my hand down my pants trying to buffer more prickers from my pants and now underwear from getting further into my skin. Holy, ouch.

Turns out they are some nasty prickers, the kind when you pull out of one place they stick into another. They were also very fine. I had some after school assistance from my girls helping me get as many of the prickers out as they could, considering the difficult location to see them to remove them myself. Although their assistance was short lived when pinching my skin with the tweezers became more fun than pulling out the prickers. I now have a series of bumps on my bottom where the big prickers were. Finally after about 36 hours the throbbing stopped. Ooh, mother nature.

I am planning on returning to the spot as soon as I can and taking a photo of the plant that was the pricker culprit. I will identify it and warn everyone. Photos to follow!