February 01, 2011
Back in January of 2009, my eyes were opened to a trend in the organic industry that I was very naive about. It was during a recall of peanut butter and products all tying back to the supplier, Peanut Corporation of America. I was surprised to see one of our favorite go to snack bars, LARA maker of the five ingredient or less Lara Bars, was on the recall list. Instantly I thought that was odd, I assumed a small Denver based company would not have such a mega-supplier. But turns out I came to learn a few things about Lara, the first being they were sold to General Mills. Read my original post here.

After doing some further reading, many parent companies of small organic brands came to light. I think the biggest disappointment for me is that quite a few organic brands have such a mom and pop persona, when purchasing them you feel like you are supporting something good. In some cases, the reality is you're just improving the bottom line of a tobacco company. Gulp.

The question that arises for me is at what point does the parent company start to interject their huge corporate philosophy into the small homegrown organic company? When do they start cutting corners, lessening quality standards, and skimping on sources of ingredients? I don't think we can quite say when, but I am sure it happens slowly over time.

Every dollar we chose to spend does make a difference. If a brand below and their parent company doesn't sit right with you, let it influence your buying decisions. For some people it may not bother them, I don't boycott these brands, but I certainly want to know where my money is going.

Kraft Foods, Inc (who is owned by Altria aka. PHILIP MORRIS) owns Boca Foods and Back To Nature. Sticking my hand in a box of whole grain crackers is the same is lighting up a cigarette, I mean if we are talking about who gets the bottom line. Awesome, NOT!

Dean Foods owns White Wave, Alta Dena, Horizon Organic, and Organic Cow of Vermont. While I am happy to report that Dean Foods, sources their non-GMO soy from North American farms, see this link, I also discovered Dean is the country's largest dairy distributor. There has been a controversy about Hexane in the processing of soy products, read my post about it, here. Horizon Organic has also taken a lot of negative press for their factory farm style (as many as 8,000 cattle) Organic Dairies. Dean also has ties to Land O' Lakes, which is the company that has been named responsible for the development of the GE alfalfa that has come into heated debate this past week.

Hershey owns Dagoba Organic Chocolate. Aww, but their bars are so cute and special. Guess I'll save my $3.00 and buy a Hershey's bar with almonds instead.

General Mills owns LARA Bar, Cascadian Farms, and Muir Glen. I've known this for quite sometime. GM doesn't sit right with me and these partnerships bother me to no end. Cascadian Farms sources many of their frozen vegetables from China and Mexico, check their labels, they are open about the country of origin. It's hard for me to believe that the organic standards in China are the same here in the USA. Boy do I wish their produce still came from the northwest.

Kelloggs owns Bear Naked, Kashi, and Morningstar Farms. I wonder why I pay a premium for these brands when it's just the same as the much cheaper Kelloggs. Or is it different? I'm not sure how to tell.

Tom's of Maine is owned by Colgate/Palmolive. Big, big surprise there.

Burt's Bees was purchased a few years ago, are you ready for this, by Clorox. How in the world does that happen? Oh Burt your cute long bearded hippy smiling face just has a new persona now, I'm assuming you're happily retired on your Clorox cash in Costa Rica or some place exotic? Or are they getting much less toxic products out to the masses? Which stance is fair to take, I'm undecided.

These aren't small organic brands, but they do disguise themselves under the natural skincare philosophy. Estee Lauder owns Origins and Aveda. L'Oreal owns The Body Shop.

I tried to do some research on a few companies that I adore and I found that they are privately owned still. Kiss My Face, California Baby, and Dr. Bronner's to name three! Wow, way to go!

If you are a visual person, I highly recommend clicking on these two InfoGraphics, they are wonderful and one of the sources of my information. If you visit Philip Howard's website, he has more great infographics on the seed industry, soda industry, and the organics industry. He's an assistant professor at Michigan State University and a wealth of information. 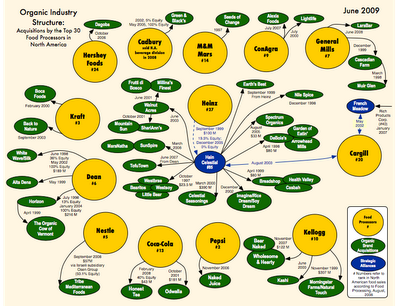 Here is a list of brands that have not "sold out" yet. Impressive, I am sure they've been approached by many of the corporate giants on numerous occasions. More power to the littles! They instantly move to the top of my support list. 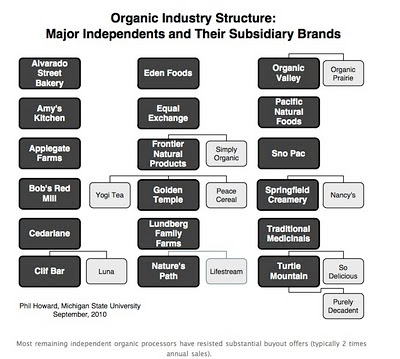 My goal is to help you feel more informed as a consumer. I hope I didn't just shatter your favorite organic brand's image.