No Mother of The Year Awards here, thanks to a Rocky Mountain Wood Tick

May 04, 2011
I've been somewhat superstitious about writing this story. I had to wait until we were through the potential "window for disease to appear" before I could comfortably share what happened. I will eagerly admit now, the guilt that came flooding through my body was almost stifling. Many lessons were learned from this one incident.

A couple of weeks ago my daughter's class went hiking on a local trail. It was a follow up to a hike they did in the Fall to compare and contrast the changes in the ecosystem from Autumn to Spring. Sometime that evening Sj told me she felt a weird bump in her head behind her ear. In a rather dismissive way, I asked her where it was and did a quick look through and a feel with my hand in her hair where she complained. We talked through it, abruptly I will admit, and I didn't see anything of concern. I didn't feel a bump, but also didn't think much of it. At the time my husband was on an extended business trip, I was trying to clean up after dinner, and my patience was probably half of what it normally is. I hate saying those things, but it was the truth.

In other words? That was truly a sucky moment for me as a mother, I would learn the following day.

The next day after school, Sj once again mentioned this bump she felt in her head. This time I was much more thorough and tried to figure out what in the world she was talking about. As I was combing through her very thick hair with a fine tooth comb, searching her scalp to get to the bottom of this "bump" I saw a dark spot. My initial reaction was a scab, which would've been strange, but definitely not the first time she scraped or cut her head that would ultimately lead to a scab. Then what first appeared to me as a scab, actually had legs. LEGS THAT WERE MOVING.

Amazingly my daughter did not freak out or start crying. She simply asked if I could show it to her in a mirror. I walked telephone in one hand calling our Pediatrician's office, her hair up in my other hand, to the mirror. I pulled out the hand mirror so I could angle it, just like a hairdresser does, she could see it. I had to talk her through what exactly it meant to have a tick stuck to her scalp while speaking with the nurse as to how to best remove the little bugger!

The nurse recommended taking a very soapy cottonball to it and holding it there for 30 minutes. The ideal would be the tick would just simply back out when I took the cottonball from her scalp. If not, call her back. Of course the tick did not back out. I freaked out, thoughts of disease and particularly Lyme's Disease came flooding through my mind. I'm from upstate New York and Lyme's Disease is rampant there. The nurse suggested using tweezers now to remove it, but that little sucker was in there good. I was scared and couldn't get it out on my own.

Ticks are one of those parasites that you hear so many stories about. Things like the head can get stuck in there and continue to feed indefinitely. They can burrow under the skin, my thoughts left no scenario uncovered. Of course googling ticks is not a good idea. In an effort to be comforted by family members, they told me things like, well the tick has to be attached for 24 hours before the spread of disease. The thing WAS attached for 24 hours, if I had only listened to her yesterday. Guilt, more guilt came rushing in.

Off to the Doctor's office we raced to get there before the office closed. Of course now it was about 40 minutes before closing and we live a good 25 minutes away, with after work traffic.

All the while a Rocky Mountain Wood Tick is feeding on my daughter.

When we arrived at the Doctor's office, every nurse, receptionist, and Doctor wanted to see the tick attached to Sj's scalp. It's not very common to see ticks in Colorado and our Doctor even mentioned she didn't think it was really a tick when she glanced over her appointment sheet. We proved her wrong, it indeed was a Rocky Mountain Wood Tick. The Doctor successfully removed the tick, head and all. I wanted to video tape the removal, but I wasn't quite sure how it was going to go for Sj, so I refrained. She did awesome, didn't cry, and there was a bit of a tugging match with some skin pulled away in the process. She plopped the bugger in a jar and sent us home with it. 24 hours later and that damn thing was still alive in the jar, so out of sheer necessity to see it dead, I put it in the freezer. That did the trick. We had to hold onto the tick in case it needed to be tested for disease. The good news, there are NO originating cases of Lyme's Disease in Colorado, there are more common tick fevers, but still they are rare.

We are now through the window of time that disease would normally present itself and she has developed absolutely no reaction or symptoms from her tick exposure. Thank you universe!!! This mama has learned a lesson, no matter how busy, distracted, or tired I am, I will always listen to my children's concerns. ALWAYS.

Of course I had to document this moment, another tale for the scrapbook? 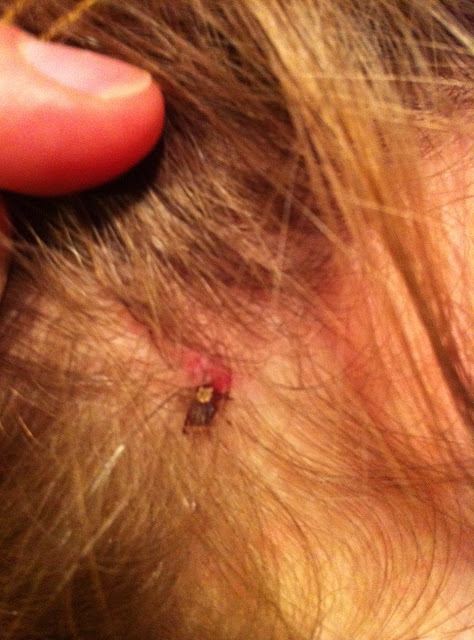