September 02, 2011
Let's face it, Colorado is the perfect place to host an annual stage race. It's been 23 years since Colorado hosted the Coors Classic, a race that once put our state on the map in the cycling world. No one could argue, thanks to Lance Armstrong and the impact he's had on the boom of cycling in the States, Colorado is once again home to an awesome bicycle race. The name on the other hand, could use some fine tuning. I suppose it's better than the Quizno's Pro Challenge, but still USA Pro Cycling Challenge is too wordy for a bike race. One of the downfalls with a name that's willy nilly is the impact on social media, there wasn't one fine tuned hashtag aka # on Twitter, people used #USAPCC, #USPCC, #USAP, #PCC, and #USAProCyclingChallenge (I always love a 20 plus character hashtag).  Boo! I had to use multiple hashtags or click through various ones to see what was being adopted.

There were six stages, eleven host cities from Colorado Springs to Salida to Steamboat Springs to Golden, about 500 miles, and the highest altitude reached was 12,126 feet above sea level. There was no shortage of big names in the race, Cadel Evans the winner of this year's Tour de France, Levi Leipheimer and George Hincapie two of America's favorite racers, Andy and Frank Schleck the charmingly handsome brother duo from Luxembourg, and even the fabulous announcers Bob, Frank, and Phil!

We weren't able to attend any of the week day stages due to school, work, and the distance from our home. We had lengthy discussions about where we wanted to go and then even broke down the two stages we were going to attend. I really wanted to see a mountain climb, but the day we wanted to observe from Lookout Mountain in Golden, turned out to be a logistical nightmare. The road was shut down the day before and to get to the top you had to either hike or cycle. Lookout Mountain is no brisk walk in the park, it's a serious and steep mountain road, without a vehicle we had no way to transport our girls up there. On Saturday we headed to Breckenridge to see the finish of the race and on Sunday we ultimately decided to head to Golden super early to catch the start of the race.

We learned Saturday after waiting for hours for the peloton to arrive, they come by in a ball of fury. Within about 10 seconds they come into your line of sight and are gone just as fast. Boom! Hours of waiting and there they go. I can't say I was disappointed the first day, but I was certainly longing for a better experience.

Lucky for us, we found the ultimate fan experience at Stage 6 in Golden.

Don't let my enthusiasm fool you, we still had to wait for hours. The sun was blazing hot already by 9am and we found ourselves perched on the rail of a place where the cyclists had to walk by to sign in for the race. Technically speaking every rider that was participating in Stage 6 had to walk by us. All nine of us, 5 kids and 4 adults, amazingly enough waited on the side of a railing for two hours. We had moments of distraction with trinkets being handed out by sponsors, we made lots of small talk with our railing mates, but we were forever bonded by the moment when we felt the exhilarating rush from the first rider to show up on our little part of the railing.

Then they just kept on coming... 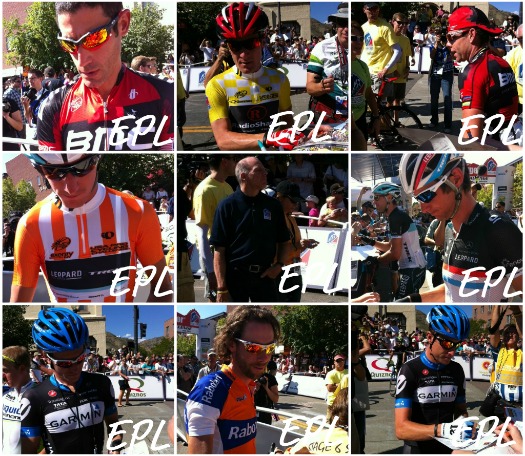 Really in that moment, I wished it was appropriate to scream like a school girl at her first Beatles' concert because I was incredibly overwhelmed with school girl emotion. At times it was hard for my brain to comprehend cyclists I've been watching for well over a decade, were simply standing in front of me, engaging my daughter in conversation. Andy Schleck walked away with GL's sharpie pen and she's told the story about him stealing her pen a good 20 times this past week. The first thing Sj did was come home and hang her autographed poster on her wall above her bed.

This race was more than a show case of how incredibly beautiful Colorado is or how well our host towns could provide a world class experience for these amazing athletes and the fans that were following from town to town. This race was life changing for our children. To go from the rather disconnected experience of watching all of these amazing cyclists during the month of July race in the Tour de France to shaking hands with them the morning before they race in our backyard, is beyond incredible. It's cycling magic. I feel so incredibly lucky my girls were able to be a part of the first USA Pro Cycling Challenge and I look forward to making it our annual tradition.

Well done Colorado, well done Levi. This is the stuff dreams are made of.