Mind + Body Challenge Continues, So How Much Weight Have You Lost?

March 22, 2012
The quick backstory is, in January I went on a 21 day whole foods cleanse which was featured in Whole Living Magazine. The basic premise was to give up 6 things, alcohol, caffeine, sugar, refined foods/drinks, gluten, and dairy. It was an eye opening experience for me and you can read all about it in these posts.


After the cleanse was over I found myself recognizing patterns I have with food and it has impacted my diet ever since. I think it's also very important to note that I no longer restrict any of the 6 things I initially gave up, but I do look at them in a new light. I tend to avoid bread and buns in favor of a lettuce wrap. Last night we wrapped our burgers in a steamed chard leaf, hello awesome! Instead of a peanut butter sandwich, I have peanut butter slathered on an apple. I have finally weaned myself off of sugar in my coffee (this was one of the last hold outs for me, being a new to coffee drinker). I keep my eyes wide open when it comes to consuming sugar after I went through detoxing off of it in January and try my hardest to limit my intake (not including naturally occurring sugars in fruit).

I would have to say the biggest change to my life post-cleanse is not my diet, but rather to my activity level. In a strange happenstance moment I was offered a trade for membership at a local gym and it has changed me. Something clicked after I started going to the gym regularly, either for cardio sessions or for core based strength training classes, also balanced with a few yoga classes to keep from feeling too tight. I started immediately seeing my body getting stronger and responding to the workouts, distances have become easier on the treadmill and I've upped the weights in most classes.

Now to the big question, how much weight have you lost?

It's a favorite! Because all of this work has to be correlated to a number right? Well here's the thing, the only scale I own is my WiiFitPlus. I took measurements and photos at the start of my cleanse, as well as weighing myself on the Wii. I initially dropped about 12 pounds, but gained a couple of pounds, and then got back to the lower weight. I've maybe dropped a pound or two since, but I don't weigh myself that much, maybe 2x a month. In case you can't sense it, this is not about how much I weigh. I'm trying to change my body by losing fat and becoming stronger and leaner. I don't know how that correlates to a scale. I really like to judge my body by how my jeans fit, there's no other truer measure to me.

Here's a photo comparing January to March, showing how my body has changed. On the left the shorts I was wearing were tight on me! 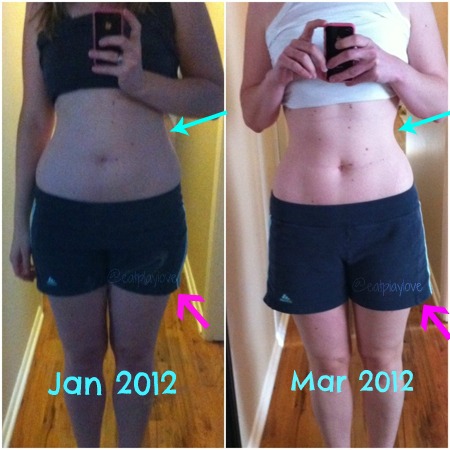 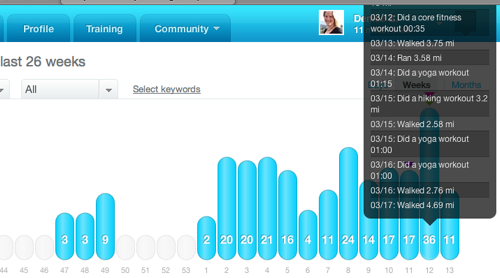 The number in the blue bullet represents the miles I completed that week, either hiking or walking/running. Underneath starting with the 1 represents from January on. The 3 on the left are from last year, I didn't use DailyMile faithfully then. The black shows other workouts I competed for the week when I scroll over the blue bullet. There you have it! I can track miles, specific types of workouts, etc all in DM. It's a great tool for me, as I love charts and graphs.

As I see it, my journey has only just begun. I'll continue to update my progress!