May 20, 2013
In October of 2011 I contacted Chipotle to ask them about the corn they use in their stores and namely if it came from BT corn (which is genetically modified corn that the USDA labels as an insecticide, not a food). The response I received from Chipotle was remarkably candid and confirmed my suspicions. I did respect them for being so open with me, but I felt a great deal of let down because Chipotle has this fabulous marketing machine painting them as the sustainable fast food choice. While my initial thought was with their corn, as corn is a crop that is over 90% genetically modified in the United States, I learned other products were also GM that Chipotle served.

For the record, Genetically Modified Organisms (GMOs) are not sustainable. It has been scientifically proven that GMOs demand more on the land, deplete their soils, and annually require more herbicide application. Of course that herbicide is produced by the company that also sold the farmer the seeds. Funny how that works. 527 million pounds of herbicide have been used on GM crops since 1996. Strangely enough, changing the DNA of plants and spraying them with a shit load of herbicides are not stopping super weeds from growing. Now, chemical companies want farmers to use a form of agent orange 2, 4-D on PLANTS WE CONSUME. Yes, this is happening. We are on the cusp of eating plants that were sprayed with a derivative of agent orange.

Back to Chipotle. Today I caught wind of Chipotle's brave move. They have identified on their website all of the foods they serve that contain GMOs in an Ingredients Statement. They openly discuss how they are working towards changing the fact that they serve foods with GMOs including their usage of soybean oil and how they've replaced their fryers with non-GMO sunflower oil. My mind is blown. I can not help but recognize, I was a part of this change. I am proud of Chipotle for their transparency, as I can not name one restaurant that notes what foods contain GMOs on their menu. As soon as they start sourcing non-GMO corn for their chips and drop soybean oil, I'll be the first one in line to start eating there again. As for now, they are still on my avoid list.

ROUND OF APPLAUSE, PROGRESS IS BEAUTIFUL!

Non-GMO foods that you can eat at Chipotle: Beans (black or pinto), carnitas, cheese, sour cream, corn salsa, GUACAMOLE, lettuce, and all salsa. Sorry, no chips yet! 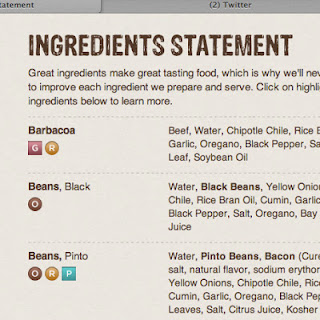