October 01, 2013
On Monday, I can easily recall rain through out the day. No sunshine, grey skies.

Tuesday, I woke up to clouds in the sky and maybe some light rain. Josh left very early for a 2 week business trip, his flight was delayed but he arrived in Los Angeles just fine. I waved goodbye to my daughter as she pulled out of the parking lot in a school bus for a 4 day Outdoor Education trip. A day of intermittent rain would follow.

Wednesday, after 5pm I was walking out to my car in the parking lot when the driving rain caught me off guard. Still raining? Then, wow it's still. raining.

It wouldn't be until later in the evening, on Wednesday September 11th, that my anxiety levels around the rain started to rise. Flash flood warnings started hitting twitter, I turned to my ipad for the police radio app to get some insight from fire and emergency crews. Boulder Valley cancelled school for Thursday. Unlike a huge snowstorm about to hit the area that comes with days of warnings, this 1,000 year rain event (100 year flood), completely surprised us. 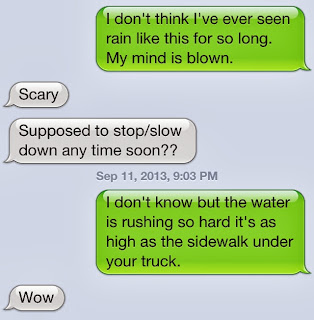 Text between Josh and I, the first night of the flooding. Josh was in Los Angeles. Our text message time line would prove to validate my level of anxiety, in one hand I'm holding it together for G, while also keeping my eye on the weather where Sj was, which very luckily was 3 hours away in the best direction possible. 3 hours away from the storm that was pounding us. Looking back upon it, September 11th was truly only the very beginning.

On Thursday September 12th 9.08 inches of rain would fall on Boulder. If you were here, saying 9.08 inches of rain would pound Boulder, would not feel like an exaggeration. From Sept. 9 through Sept. 16, the storm dropped 17.15 inches of rain on Boulder. Basically that's our ANNUAL rain fall in one week. By mid-day Thursday we recognized how deeply we were into this powerful storm system. I found myself outside twice digging out ditches to lead standing water from around my home into other parts of my yard. There was officially no way out of my neighborhood for about 18 hours. I texted a neighbor to tell her if the water started to rise from Bear Canyon Creek just 2 blocks from my house, that we would be at her doorstep looking for shelter. Another neighbor updated on Facebook that she was evacuated from King Soopers.

On the morning of Friday September 13th, we would wake to police tape marking an impassable street at the end of our block. The water that normally was barely a trickle in the dry creek bed had taken over it's banks and was rushing down an additional 3 lanes of road that surrounded it, there were boulders filling both eastbound lanes. Parts of the road washed out and a gas line was exposed. In the mean time, I was figuring out how to get out of my neighborhood, at this point about 75 roads were still closed in Boulder, simply so I could pick up my daughter at school from her trip. I was so happy the BVSD transportation department allowed scheduled bus trips to proceed even though the district was shut down. Together my daughter and I witnessed the intensity of the storm on a simple 3 mile trip home from school. A car was turned on it's side washed up in the storm and through someone's backyard fence. Flood debris littered every single street. Rocks, sand, mud, trash cans, tree trunks, boulders, cars, were all strewn in ways only a national disaster could toss them.

There were many moments that my mind could not comprehend what I was seeing.

Saturday September 14th the rains lightened through out the day, but also came back in fierce waves. At some point I had to get on the roof during one of the heavier rains, to tar a very minor leak we had where our furnace exhaust exits the roof. We finally left the house to get the girls to dance class. We once again witnessed the first hand devastation of the water, swiftly moving currents of water destroys roads, buildings, and bridges. Fences were just gone. Roads washed out. Chinook helicopters (aka flying buses) were flying overhead to rescue people from our mountain towns. While the sound of the helicopters should have been welcoming, it was just a reminder of how incredibly devastated our community was. The Colorado National Guard rescued around 3,500 people in every possible flyable moment. There were also tall vehicles trucking people out of communities like Lyons where the major thoroughfares were washed out.

I sat in the dance school parking lot and just cried my eyes out.

Two weeks later and things haven't returned to normal. I am not even exactly sure what normal means anymore. Resilience is the component of the human spirit that is not wavering, so we just push on through. Lend a hand, heal our hearts, and learn to carry on.

I've chosen not to show any images in this post, the continual images of destruction have been affecting my ability to recover. Sharing my words have helped, but out of respect I had to hold off on powerful images.

-----
Boulder/Denver/Colorado I am woman hear me roar