January 26, 2014
Casual dining restaurants have been shuttering for years now in Boulder. This weekend the Olive Garden has joined the ranks of many of it's competitors, citing Boulderites loyalty to their favorite locally owned eating establishments (oh and we hate crappy chain restaurant food). Every time I drove by the Olive Garden on Pearl Street, I thought oh yeah, Boulder still has an Olive Garden and then my thoughts immediately went to, how in the world is that place still bringing in customers? 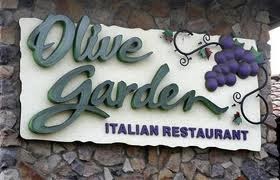 The Olive Garden is not alone, here's my best attempt at recalling our disdain for America's most beloved restaurant chains. A McDonald's on Table Mesa was shuttered over a decade ago and now houses a locally owned drive-thru coffee shop, Que's. A Chili's on 28th Street was replaced by the Baker Street Pub which has also shuttered, I mean how can a place like that compete in Boulder's deeply rooted brew pub scene? The Applebee's was completely razed for a brand spanking new building that will house our very first Trader Joe's, slated to open on Valentine's Day. The TGIFriday's or Friday's or whatever the heck it's branded itself to be now closed and was replaced by locally owned Turley's. A Wendy's restaurant was also leveled to create parking for Hazel's Beverage World which is locally owned. Now that I am on a roll, I recall on Canyon Blvd there was a Black Eyed Pea, which shuttered to make way for The Original Pancake House, which is now the new home to The Buff Restaurant one of Boulder's beloved breakfast spots. Red Robin shut down so a HomeGoods store could take over the plaza, but opened a place close by called Burger Works, it doesn't look like it will last much longer. Boulder was also home to Dunkin Donuts, which was a local coffee shop for years, and now is home to a herbal medicine dispensary. Dunkin Donuts is setting up shop again in North Boulder where a KFC/A&W closed this past summer.

I do love that Boulder has continually embraced locally owned restaurants, I can't say I miss any of the restaurants that have moved along to more bustling generic suburban locales, they do love their chains just east of us (I know, I lived there for 8 years). I think we should add to the Boulder City Limits sign, 5,430 ft elevation, Home Of Real Food.