Dallas Buyers Club, It's Worth The Fight 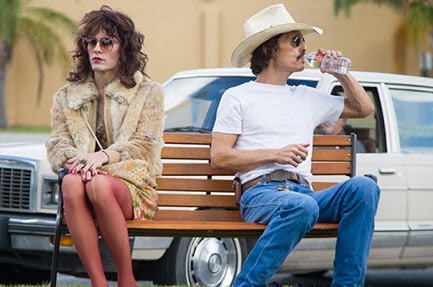 Arriving just a few moments early, the theater had yet to go dark, I glanced up and felt relieved by the sight of a nice group of empty seats in the very top row center. By the time the lights went down and the previews began, the theater had completely filled up. I nonchalantly imagined there would be a handful of us at the 2:30 pm showing of Dallas Buyers Club, but I was wrong. Before I knew it drones of grannies were flanking me (maybe they were there for Jared, too). When the movie opened with Matthew McConaughey having sex under the bleachers at the rodeo, I adjusted a bit in my seat feeling like I was in the company of my elders watching porn. There weren't many other moments where I became distracted by those around me. I was so absorbed by the story, the characters, the depth of how easily I was transported into the life of a man living out his death sentence.

When the movie ended and everyone started to shuffle out of the theater, I sat back for a few minutes digesting the spectrum of emotions I just experienced, from devastation to triumph. Surprisingly there was an element of the movie that struck a chord, that just kept playing over and over in my mind. That element was the corporate control of the FDA and how historically this governmental flaw runs so deep. The FDA was found lurking around many turns through out the story, always waiting to seize the last breath of Ron Woodroof. I was floored by the FDA's ability to control the release of toxic drugs and suppress an American citizen's ability to acquire a combination of supplements that helped extend life, all in the name of corporate greed. One of the greatest divisors of our country is the push button term, right to life. BUT… when we delve deeper and contemplate all the ways our government allows human life to be pushed aside and even lost, my heart grows heavy and inward. Life should never be diminished by a corporate bottom line.

Ron Woodroof's story and his courageous fight for other AIDS patients, just brings light to the struggles we are facing today. Unfortunately there aren't many beacons of light like Ron to guide us, swells of movements are like little pin holes across our great divide. Every single day I think about how our government should put citizens first, our laws should protect us, but instead our laws protect corporations. On my snowy drive home, I decided if Ron had the courage, so do I. And if I have the courage, maybe a collective can have the courage, if we have courage, maybe the government will start to hear our battle cries. In 2014 the issues we face are much different than they were in 1985, but I don't doubt for a moment fighting for what is right is simply the American way.
I am woman hear me roar