August 08, 2014
Boulder is a great town for food, but when it comes to drinks I feel like I'm always at a loss. I don't have a go to place, but rather a few places that get the job done. It's important to make the disclaimer that I don't particularly care for sugar laden drinks, I do love Prosecco, but you can find that pretty much anywhere, so it becomes more about ambiance. I typically wind up at Pizzeria Locale because well, ambiance, drinks, and fun. Unfortunately their hours are limited for late night enjoyment. I do love the mojitos at Centro, but overall that scene isn't a huge draw for me. The Med has $5 sangria which is fabulous, but OY, the sugar. I really feel the sugar the next day. Plus the Med has the typical retirement crowd, which isn't really my vibe on a fun night out. There's also the St.Julian, meh hotel scene and the drinks are a bit pricey in my opinion, but there is dancing, bonus! We always stop into Japango for a drink, but that's only because of Stanley, the bar manager, aka Boulder's unofficial mayor. Oak has a great bar as well, but my palate just doesn't quite gel with their drink menu, then there's the noise and heat level inside that place.

But wait for it… I have a new place that I LOVE! It may be my place! I've been desperate to find my place. It's Bramble and Hare.

One night at Japango, I sat next to the bartender of Bramble before his shift. We got to talking and I really enjoyed his creativity and palate, I immediately thought I need to check it out. A bonus is that they serve food late, which is also hard to find in Boulder. Last week, on our date night, we weren't heading out until closer to 10pm so we decided to give B&H a try. I am so happy we did. 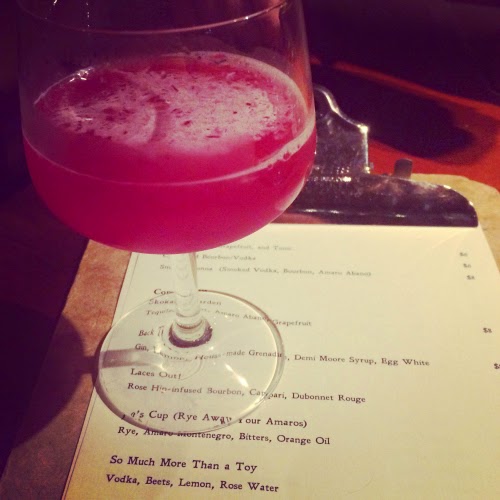 I ordered the, So Much More Than A Toy, which was vodka, beets, lemon, rose water. OH MY GOODNESS, it was beyond delightful and totally speaks to my drink sensibilities. There were many drinks I wanted to try, but decided to stick with this one for the night and try something new on my next visit. B&H also has the bartender's choice and the table next to ours was not disappointed with what he came up with on the fly. B&H offers small plates and I indulged in head cheese for the very first time, I felt like I was taking a dare when I tried it, as it turns out I really liked it. Bramble and Hare is the sister restaurant of the Black Cat Bistro which is next door. BCB is a farm to table restaurant and the chef owner, Eric Skokan owns the farm that supplies his restaurants. The long and short of it is, the food is superb and a great compliment to the drinks. Bramble and Hare is a fabulous way to get a glimpse of what's happening next door, with out the commitment of a sit down dinner. 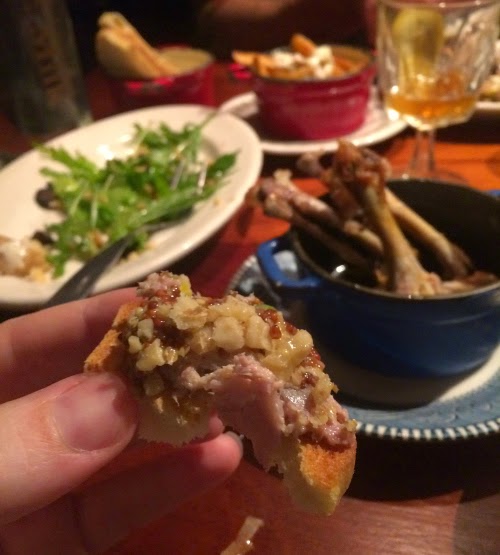 Head cheese, salad, wings (some of the best wings I've ever had)

I think it's time to rally a girls night out and head back to Bramble and Hare. They have early evening happy hour and a late night menu with special pricing on drinks as well (I believe after 11pm). The kitchen stays open until 1am.